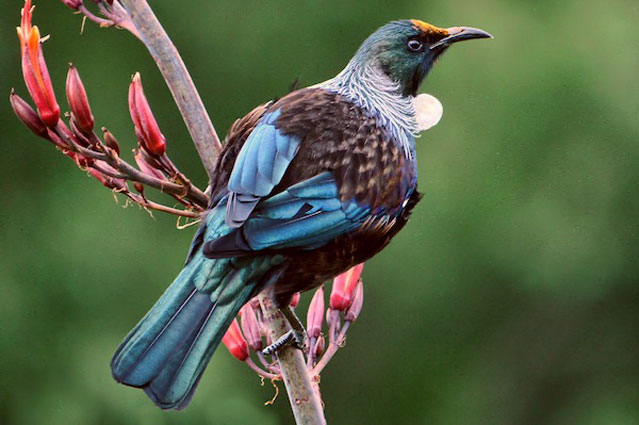 Tui are a boisterous, medium-sized, common and widespread bird of forest and suburbia, unless you live in Canterbury.

Tui look black from a distance, but in good light, Tui have a blue, green and bronze iridescent sheen, and distinctive white throat tufts (poi). They are usually very vocal, with a complicated mix of tuneful notes interspersed with coughs, grunts and wheezes. In flight, their bodies slant with the head higher than the tail, and their noisy whirring flight is interspersed with short glides.

Tui are notoriously aggressive, and will defend a flowering or fruiting tree, or a small part of a large tree, from all-comers, whether another Tui or another bird species. They vigorously chase other birds away from their feeding territory with loud whirring wings.

Tui have a display flight, in which they fly upwards above the canopy, and then make a noisy, near-vertical, dive back into the canopy.

Tui play a very important role in the dynamics of New Zealand forests because they are one of the most common pollinators of flowering plants, and also disperse the seeds of the trees with medium-sized fruits.