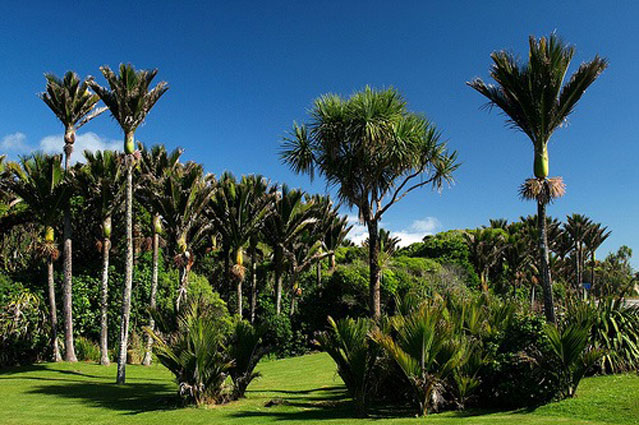 The Nikau Palm is the only palm species endemic to mainland New Zealand. Its natural range is coastal and lowland forest on the North Island, and on the South Island as far south as Okarito mostly in humidity (43°20′S) in the west and Banks Peninsula (43°5′S) in the east.

The Nikau Palm is the southernmost member of the palm family, a group that is usually tropical or sub-tropical. There are over 1100 palm species around the world, including some of the world’s most useful plants such as the oil palm, banana, coconut, and sago palm. Although a number of palms have been introduced to New Zealand and are planted around our towns and gardens, the Nikau Palm is the only native palm species.

The Nikau is very slow-growing. Research conducted in lowland forests near Auckland found it takes 40 – 50 years to begin to form a trunk and about 200 years to reach 10 metres tall. On average, two fronds are shed per year leaving behind a leaf scar on the trunk which can be used to give a rough indication of age since the trunk began forming.

The Nikau produces flowers between November and April, and fruits ripen from February to November, taking almost a year to fully ripen. These are a preferred food of the kererū, the native wood pigeon.

Maori found many uses for the Nikau palm. The bases of the inner leaves and the young flower clusters were eaten raw or cooked. Food was wrapped in the leaves for cooking, and the old fibrous leaves were used for baskets, floor mats, and waterproof thatch for buildings.