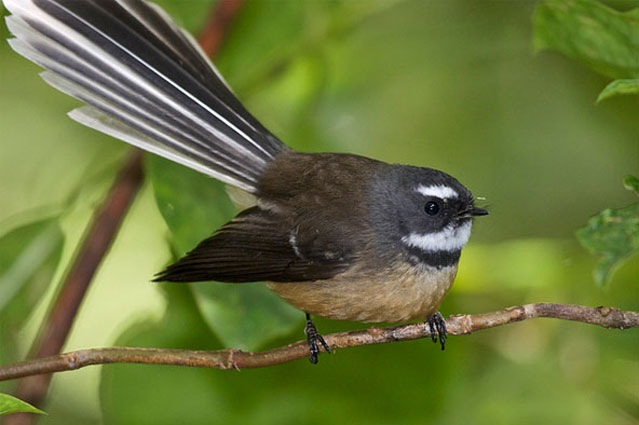 Known for its friendly “cheet cheet” call and energetic flying antics, the aptly named fantail is one of the most common and widely distributed native birds on the New Zealand mainland. It is easily recognized by its long tail which opens to a fan. It has a small head and bill and has two colour forms, pied and melanistic or black. The pied birds are grey-brown with white and black bands.
The fantail is one of the few native bird species in New Zealand that has been able to adapt to an environment greatly altered by humans. Originally a bird of open native forests and scrub, it is now also found in exotic plantation forests, in orchards and in gardens. At times, fantails may appear far from any large stands of shrubs or trees, and it has an altitudinal range that extends from sea level to the snow line.

Fantails use three methods to catch insects. The first, called hawking, is used where vegetation is open and the birds can see for long distances. Fantails use a perch to spot swarms of insects and then fly at the prey, snapping several insects at a time.
The second method that fantails use in denser vegetation is called flushing. The fantail flies around to disturb insects, flushing them out before eating them.

Feeding associations are the third way fantails find food. Every tramper is familiar with this method, where the fantail follows another bird or animal to capture insects disturbed by their movements. Fantails frequently follow feeding silvereyes, whiteheads, parakeets and saddlebacks, as well as people.